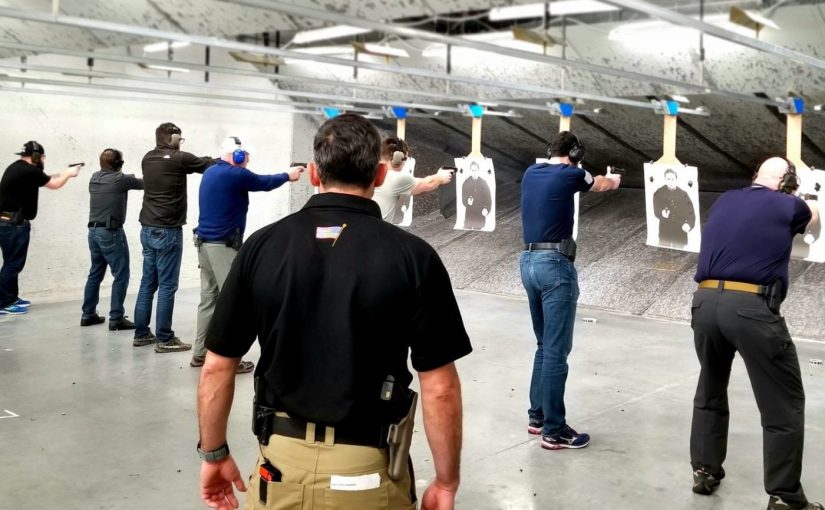 This is part four in a series of business posts about things I learned as I was taking a series of defensive shooting classes with a Navy Seal. So if this isn’t your cup of tea, feel free to skip these posts. If you missed part one, you can find it here, part two is here, and part 3 is here.

On the second day of Pistol 3 I did a diagnostic test with Jeff Gonzales (the retired Navy Seal Team 4 BUDS instructor, CEO of Trident Concepts and head of training at the Range in Austin). It wasn’t looking good. At 25 yards my shot pattern was definitely listing to the left. My grouping was tight, so it wasn’t a traditional accuracy problem, it was something mechanical – something about how I was holding the firearm that was causing the problem.

Being that Jeff has decades of experience behind a pistol he diagnosed it immediately. I was rubbing the frame of the pistol’s trigger guard with my index finger. It seems incredibly minor and at closer yardages you’d never even notice. But at 25 yards it was noticeable enough that I was off by at least 4 inches of center mass, which is the difference between all of the shots going into the 8″ ring and only half of the shots going in. By increasing the distance it allowed us to highlight a problem that was otherwise invisible.

I just couldn’t seem to find a comfortable way to hold my hand that wasn’t causing the rubbing issue. My hand naturally wanted to sit a bit higher and my index finger wanted to be at a downward angle – frustrating!  I tried a few different ways of holding the pistol until I remembered another piece of advice that I had been taught, that I simply didn’t grok when he said it.

“Point your elbows down.”

He said simply, “Point your elbows down.” He clarified, not straight down, but more downwards than outwards – the idea being that it locks your elbows into place and transfers most of the energy down your arm and into your shoulders and torso, which is a much better place to absorb the shock than in the muscles of your arm.  So I gave it at try.

The simple act of rotating my elbows downward slightly rotated my right hand, and by rotating my hand it was suddenly a lot more comfortable to hold the pistol in a way that my finger was no longer at a downward angle but on a flat horizontal plane. By not being at a downward angle I was no longer rubbing the frame of the pistol. My shot pattern was magically cured. My shot pattern immediately went back to center mass, and I went from missing 50 percent of my shots to missing virtually zero at 25 yards in an 8″ ring.

I was astounded at how such a seemingly minor stance issue that was a foot away from the pistol was causing such an issue, and how easily it fixed itself.  Of course it wasn’t as simple as that – re-learning how to draw and hold a firearm after 40k-50k rounds will take time. But at least I realized finally what the problem had been and had a clear path to remedy it.

In a business context this is like the butterfly effect.  We see it happening all the time. One tiny thing in one part of the company will somehow effect something in a completely different part of the organization in a negative or a positive context. Think about how many times we see one tiny little manufacturing issue cause something like Samsung Note battery-gate or Apple’s antenna-gate.  But it is often a more systemic cultural problem that leads companies to have issues, that are far more internally mundane and less outwardly dramatic.

We all have seen things like poor performance being allowed to persist, sexual misconduct being un-dealt with, people taking credit for other people’s work, or a cultural vampire being coddled.  These tiny cracks in our corporate culture can have disastrous outcomes for morale.

Let’s take a fairly benign example like corporate tardiness. It seems like a completely benign issue – a vice president is running behind and they simply arrive 20 minutes late to a meeting.  Let’s say there’s 10 direct reports to the VP in that meeting – that’s 200 minutes (3 1/3rd working hours) wasted, and worse, it sets up a precedent that that is not just allowed, but expected.  It is expected that if your meetings are more important than the people you work for, that you are allowed to waste their time and it’s expected that your time is more valuable than theirs.  How will your employees feel about themselves if they feel their time isn’t valued?

What about something more obviously bad, like corporate malfeasance. I’ve been asked to work for companies and work on projects a number of times that had a clear odor of industrial espionage, and other unsavory asks of me. I flatly refused to do that work in case you were wondering, but after it was asked of me, I felt a huge disconnect from the companies in question – if their executives turn a blind eye and/or actively support engaging in illegal activities, that shows a huge lack of character. Talk about a morale killer – almost no one wants see themselves as the bad guy.

This butterfly effect of cultural woes can start at the executive level. I like to think there are two types of executives… a peace-time and a war-time executive. In peace-time you want to spend building, repairing, and getting all of your housework in order. In war-time you want to be laser focused on what you’re trying to accomplish, focused only on the mission and not letting any distractions get in your way – it’s win or perish.

Some executives are great a peace-time. They’re great at hiring and inspiring. They excite people about the corporate values, the perks of working there, and they construct a great atmosphere.  But when it comes down to conflict with external forces outside of the company, that’s when you want a war-time executive.  A war-time executive is someone who can rally the room and gets the team hungry to win – it’s not always a great/happy seeming atmosphere from an outside perspective, but when you’re in the trenches, you need a commander who knows how to motivate in dire circumstances and won’t buckle under the external forces. However, if you take that same war-time executive and have them do a fluffy walking tour of the cafeteria and rec-room for new recruits, they might lose their mind, so both types executives are incredibly important for company survival.

It’s a butterfly effect – if you meet someone who is yelling at you to work faster because the enemy is at the gate, when you still don’t know where the copier is, that’ll drive most people to quit. Similarly, if someone is asking where you want to go for the mandatory team outing while high-priority deadline-driven work is crashing over you like waves, you’ll probably snap. It’s a nuance that is lost on most people, and to be successful as a manager, it requires attention to the situation your co-workers are in and how you’re working with those people.

This is where a measure of good corporate culture, understanding of the threat landscape and metrics are your friend. Let’s dig into metrics. Your company should have a dashboard where every employee has a set of metrics that they need to set and meet on a weekly basis. At that point each and every employee is getting a red, yellow, or green light that they, themselves, set. The only things the managers do is make sure that the goals for that week are correct and then set their own goals, rolling up everyone’s metrics. If an employee misses their goals, that likely reflects in the manager’s goals, and their manager’s goals and so on.

Eventually the company’s entire dashboard rolls up into the CEO, who is effectively the chief executive sales person for the company. This way, if the CEO knows there if there is a huge announcement at the customer conference coming up, they can track every person down to employees they’ve never even met who may have a driving force on the success of the launch of the product. The CEO can see the health and happiness of their employees through regular 360 reviews.  The CEO can track sales across the entire enterprise, without having to sit through tons of sales meetings. That is is getting the visibility you need when you intend to lead a successful company.

With metrics in hand, at a glance, the executives everywhere in the company understand how the health of the rest of the org is shaping up. Problem employees can be spotted immediately. Be careful though – is it a bad employee, a bad manager, a bad project, or bad working environments? Don’t jump to conclusions. Projects that are suffering from technical issues can be spotted early. But be careful – is it a bad project or suffering from bad oversight, or does the material they’re working with need more time to be fully understood mechanically and will miss deadlines, etc?  By highlighting and focusing on the issue, you rarely will find that you have a gaping hole in the enterprise that you can’t identify well before it festers into a complete disaster. No one is too far removed from problems and remedies if you have enough oversight.

In companies you only have a certain amount of rounds in the magazine… or a certain amount of attempts available to you. And each attempt is a gamble and comes at a cost if you fail, so you should be gambling with the best odds available to you.  That means that you need to find and remedy the small stuff that’s holding the whole company back.  Those tiny flaws can get amplified into catastrophe if you’re not careful.  So find ways to highlight the failure and then fix all the things that surround and ultimately cause that failure.

Thus concludes part 4 of the series. Part 5 can be found here.