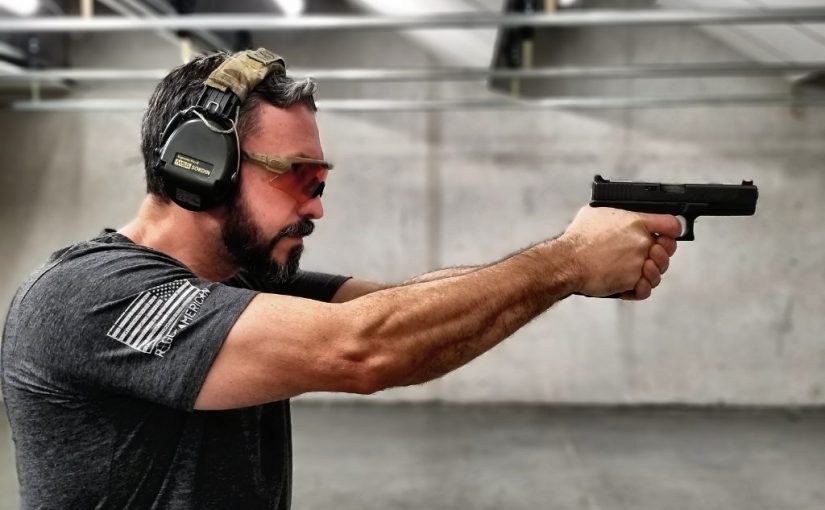 This is part five in a series of business posts about things I learned as I was taking a series of defensive shooting classes with a Navy Seal. So if this isn’t your cup of tea, feel free to skip these posts. If you missed part one, you can find it here, part 2 is here, part 3 is here and part 4 is here.

During defensive pistol training I took with Jeff Gonzales (the retired Navy Seal Team 4 BUDS instructor, CEO of Trident Concepts and head of training at the Range in Austin) we spent time focused on finger placement and how to hold a firearm. It’s not like the movies. You can’t just grab a pistol and turn it sideways and start spraying bullets and have any practical hope of hitting anything accurately. You need proper hand placement.

“A pistol is a fulcrum.”

One of the things that made the biggest difference for me as a shooter was understanding the mechanics of recoil management and something Jeff said, “A pistol is a fulcrum.” That is to say, much of the traditional advice on how to hold a pistol (as high up and as close to the slide as possible) doesn’t make much sense when you realize that the pivot point is your middle finger and the furthest point from the slide that you can put your hand on is the bottom of the tang of the pistol.  When you realize that the pistol is a fulcrum you want to keep your hand slightly lower on the tang and squeeze with your pinkies so you can counteract the recoil.

The major reason to keep your hand high is if you had massive hands where you could be both high on the tang and low on it at the same time and cover both sides of the pivot point. As most people don’t have huge hands, that advice is really just placing the bulk of your hand on the pivot point, giving you less control over the pistol. So for most people without big hands, the common advice of placing your hand close to the slide isn’t that useful.

Imagine you have a slow-moving fan. It would be kinda like trying to stop a fan blade by touching the closest in part of the fan, compared to the outer-most part of the blade. Of course you can probably stop it either way, but you have to apply a lot more pressure and it is harder to do to stop it close to the pivot point.  When a handgun fires it wants to rotate around it’s axis and if your pinky finger is locked into place you’ll reduce the amount of movement substantially.

What does this have to do with business? We’re getting there.

When I think about what compromises a company, I think about things like corporate mission statements, corporate values, corporate aesthetics, the market landscape, founders, the brand, and so on. But one thing many people fail to discuss is the DNA of the company – the contracts.

When you look at the design of a company it was probably inspired by one or a small handful of people who came together with the promise of a good idea, a company name, and went online or found a lawyer to write up some operating agreements. Let’s say in this hypothetical company there are two founders, each with 50% ownership with equal voting rights.  Those details are something they write into the operating agreement and it becomes a fundamental force within the company that will long survive most any other things that happen.

Now let’s say one of those two founders wants to sell the company because they got a great buyout offer before they even got funding.  That sounds great right?  But what if the other founder doesn’t want to sell? They have no built-in legal recourse – there are in stalemate because of the 50% equity and 50% voting rights written into the operating agreements. There is no path forward because the DNA of the company was written to allow that sort of stalemate. It’s the most important decision in the company’s short history and they won’t be able to make it.  This might sound far fetched but I see this kind of thing happening all the time.

The only reason to have contracts at all is for when the bad thing happens and the people involved in the contracts come to a disagreement. At that point every word in the contract governs what happens next.  If you don’t have your company set up right from the beginning it is very difficult to unwind the contracts – especially because the day you’re wanting to make said changes is likely the same day you find yourself in conflict.

But it gets worse. Contracts are additive, and rarely subtractive. So as new people join the company, they each sign their own contracts (heaven help you if they’re all unique). As you take on clients, they too sign contracts. You want an office, you’re signing a lease – which is a contract. You take on a small business loan – there’s another contract. You want insurance – there’s a contract for each of the policies. You use software – there’s a ToS and MSA for you for each piece of software. You want corporate credit cards – more contracts.  You have partners – each has their own non-disclosure agreements, master service agreements, and addendums. It’s a snowball effect and gradually it becomes impossible for any one person to mentally keep track all of what is in each of those contracts. That’s not even including regulatory issues with health companies (HIPAA) or finance (FINRA) etc. Corporate governance quickly becomes a nightmare. But make no mistake, each one of those contracts/rules is lever, forcing the company to move in one direction or another – maybe ever so slightly but it invariably happens.

Over the long-haul, you find that there are some contracts that make an existential change to your company’s values. You may have started with a corporate mission statement about changing the world and have all of the best intentions to keep that mission alive. However, once you take on investors, you may find that the only thing you are contractually obligated to do and your fiduciary responsibility is suddenly to increase burn at a dramatic rate, so that the venture financiers can force you to take another round and dilute your equity even further.  After all, when they know they have a winning hand, they’re going to want to double down on their investment and get more equity in your good idea.

So over time you may find that your company becomes a slave to financing, taking another round, just to waste time, burn more capital, and finally take yet another round, where you get diluted even further, until you’re such a minority shareholder that you have zero ability to control the board, or any decision at all in the future of the company.  That lever was put in place to edge the founder out and make the venture financier extremely wealthy.

An even worse version of this is found when companies go public. Public companies are so focused on short term (quarterly) profits, and investor sentiment that they cannot pick their heads up and look at the long-term strategic needs of the company. That’s one reason you see massive companies who seem to have forgotten how to innovate completely. All of the best people cash out and go to smaller nimble/fun companies, or if the employees stay, they’ve become lazy and stay due to golden handcuffs and become disillusioned by the increased bureaucracy. There’s no faster way to turn a high-performance employee into a 9-5 employee than to add layers of bureaucracy. These companies often turn into a make-shift M&A groups that are poorly designed for the task, integrate new talent/tech terribly and ultimately just crush everything they purchase – all because the IPO contracts they signed require them to.

So much for those lofty corporate goals you had when you were starting the company about saving the world. Now it’s a profit-driven hamster wheel that’s out of your control and one in which you’re unlikely to see any meaningful profits from as a founder while your control and equity approaches zero percent.

With each new contract, you’re increasing the length of that fulcrum and making it harder and harder to control your company until you lose all sense of what it was originally. That is why it is incredibly important to know what each and every contract says, and not give up anything you don’t have to. It may make negotiations a bit more tense, and drawn out, but if it becomes the difference between you having a majority share of a company and abject failure, I think it’s worth the extra legal fees.

In the case of employees, it is the same, just a microcosm. How your vacation policy reads, how your bonus structure reads, how your benefits read… those are all negotiable and it’s incredibly important that you do negotiate them (assuming the company doesn’t have standard levels for all new-hires).  I have run into a number of situations where young security practitioners are worried about the cost of moving for a new job, and I’m quick to tell them that moving costs are negotiable. So are the losses of whatever equity you would have had granted to you if you had stayed in your current job. So is the vacation amount you have. So is a sign-on bonus, and on and on. Every detail of your pay, your bonus structure, and your perks are negotiable – to varying degrees. Want a company car? Want to work from home 3 days a week? All of those things can end up in that contract, depending on how badly they want you.

Each one of those demands gives you more leverage, and by asking for more, you will get turned down on some of it, but the chances are you’ll score more wins than you think. There’s a subtle balance of course – you don’t want to annoy the hiring manager – especially if you’re abilities aren’t unique/valuable. However, you also don’t want to try to fix issues after the contract is signed – that’s like trying to slow the fan blade down from the pivot point – it’s just the wrong place to be negotiating from.

By applying pressure to the contract phase of the negotiation, you can get a better handle on the situation. When things go wrong, you’ll have a lot more leverage than if you didn’t. You can win if you give yourself the right purchase on the situation but that means knowing the tools at your disposal. It’s not that complicated, but like in a firefight, it’s not something you likely get a second chance at, so you had better get it right.

Thus ends part 5 of the series. Part 6 can be found here.