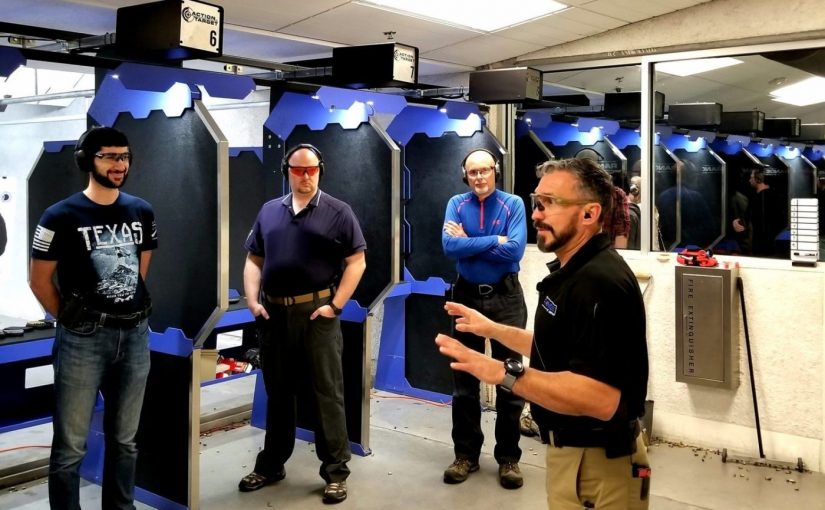 This is part six in a series of business posts about things I learned as I was taking a series of defensive shooting classes with a Navy Seal. So if this isn’t your cup of tea, feel free to skip these posts. If you missed part one, you can find it here, part two is here, part 3 is here, part 4 is here. and part 5 is here.

As part of the re-certification for my “draw from holster” card, I needed to take a skills assessment test with Jeff Gonzales (the retired Navy Seal Team 4 BUDS instructor, CEO of Trident Concepts and head of training at the Range in Austin). I was worried, because I hadn’t had much range time in a few months at that point due to a few big things that had sapped my free time completely, and I felt that I wasn’t going to do well. I felt that I was having trouble with my shooting and I felt like my sights were set up wrong, and I just wasn’t feeling confident, which is ironic, because in reality I was shooting just fine in hindsight.

I took the skills assessment and failed. I wasn’t awful, but I still didn’t pass. I wasn’t surprised I failed – it’s designed to be an extremely hard test. But the part that did surprise me is that I missed shots that I normally make when I’m practicing on my own. It was something about the testing environment that had made me choke.

One day, I was in the back of the range where the staff offices are, with the owner – a friend of mine, Grant Shaw (also of SB Tactical) – and I ran into Jeff. I told Jeff I was re-taking the skills assessment in a week. He smiled and said over his shoulder as he was walking away, “Are you feeling confident?”

I’m sure he was expecting me to say I was definitely going to pass. After all, I was close to passing the last time. But instead I said, “No. I normally never miss those shots. I’d say yes, but just don’t normally miss those shots when I’m practicing, so…  I dunno! The stress of the test is throwing me off. I have no idea.”

He stopped in his tracks turned around and said flatly, “The previous shot doesn’t matter, the only shot that matters is this one.”

“Focus on the shot you’re making.”

He added, “Just relax. Focus on the shot you’re making.”

I nodded, not quite sure how to interpret his words at first. Then I figured it out. I was just way way too wound up about the last shot. Once I missed a shot, which is very easy to do during his skill assessment because he starts you off at the 25 yard line, the rest of the shots were all way off for me, because I was so upset about missing that first shot.  Once I blew the first shot the rest of the test was hopeless.

The next test came up a few days later. I had practiced like crazy – I had literally done the test at least 40 times on my own practicing for it and focusing on the hardest shots so I knew that there wasn’t an inherent underlying skill problem. No, I was still nearly perfect every time – just like I had been before the test. There was no discernible difference no matter how many times I took the assessment test on my own.  The only thing left was the stress.

Lacking any better options, I decided to heed his advice.  So I made a conscious decision to stop caring if I missed a shot while I was taking the next shot. Sure, it gnawed at me that I missed anything at all, despite how hard the test was, but I just let go.

To be honest, even though I practiced that test 40+ times, I don’t think my skill was wildly better. However, my confidence about each shot was renewed with each round. It was as if I were shooting each round like it was the first of the test. And instead of failing miserably, I got a 98% – I missed exactly once. What an amazing relief!  The problem was between my ears – it was how I was thinking!

In my mid 20’s I was given a product management team to lead. I had a project to deliver – a cool new mapping project.  I was really proud of what my team had built, and it was leaps and bounds better, by all measures, from anything else we had in the company. I was thrilled to see it was scheduled to into production, until one of the vice presidents for the company walked in and told me it was shelved and wouldn’t launch.

Shelved? I couldn’t fathom why – it was supposed to launch within 2 days, the product worked great, everyone loved it. But that was the problem. We were launching it on a platform that the company wanted to get rid of, and if we made the old platform better it wouldn’t entice people to want to move to the new platform. That’s not to say the new platform even had a budget, or a thumbs up from anyone to proceed. So it’s not like I’d just launch it somewhere else. It was effectively permanently dead. Talk about kicking me in the stomach. I was pretty gun-shy about launching product after that. I took it personally, and after that I found myself being a lot more careful about the ecosystem in which I launched products. To be so close and have such abject failure was really a gut punch.

Later I started a consulting company. It was actually pretty successful initially – it got up to about a dozen full-time employees at it’s height, was grossing well over a million a year, and was very well known in the security world for how small it was. But then the mortgage crisis hit, and the economy as well as my small company that I had built from scratch imploded.

However, I didn’t dodge a bullet, as much as it seemed like I may have. All of my customers’ budgets dried up immediately. Corporate austerity was placed on any discretionary budgets, including external consulting work, like my company specialized in.

Over night, my little company went from a healthy pipeline of a million a year to a few thousand.  Like any good CEO I had about 6 months of cash reserve for emergencies, but we were hearing things like “We’ll get back to you after the new year when we have budget again.” This was in September and October.  The end of the year was months away! Months away before they’d even talk to us. Then it would take months to get contracts signed, then weeks to months to complete the work, then 45 days in arrears for payments.  We’re talking about 3/4ths of a year minimum to get back to making money.  The company simply couldn’t afford that.  So, after looking at the finances, and some very stiff drinks I decided to pull the plug. I had to lay everyone off, including myself. I literally stood in the mirror and fired myself – it was surreal. The only person left (to this day) was my COO, who was critical for some of our recurring revenue customers.

What a catastrophe! I was devastated. Depression kicked in. Every interaction, every contract, every engagement – it all ran through my head. Where had I gone wrong? Honestly, I wouldn’t blame anyone in my position for giving up completely. It had been years of my life, and I had no meaningful savings to speak of, no company, and now I had to go on a road-show to tell everyone that my company had imploded.  Brutal!

But looking back on it, now a decade in the past at the time of this writing, I have a sense of peace about it. I learned a lot from that failure. I learned and got better. For instance, I realized consulting companies weren’t scalable. I learned we should have had more diversified customers to sustain the number of employees we had. I learned that I should be focused on recurring revenue more than one-off, ad-hoc contracts. I learned we should have had larger cash reserves and been more cash efficient.  It’s incredibly important to learn from all available information, but most importantly, don’t divide your focus. Focus on the now, not on previous failures or the fear of future failure.

So when I began my next venture into being an entrepreneur, it was done with a sense of calm, not a sense of fear. I had solved many of the problems with the new business model. I had new problems, sure, but I wasn’t going to let the failures of my past define the future. It took years of hard work, and I won’t say it was an easy road, at all (entrepreneurship rarely is) but my company did get acquired eventually. If you crave to run your own business, or seek difficult roles within companies, you have to push the fear of failures away. You need to focus on the now, and give this opportunity in front of you all of your energy.

Whether that be in work, or relationships, or learning a new skill, you need to focus on the now. Focus on what you can control, and unless you’ve got a working flux capacitor in your DeLorean, you can’t control the past. But you can control how you act right here, and right now. Learn from your mistakes yes, but most importantly focus on the chance you have right in front of you, and above all else, don’t mess up this shot.